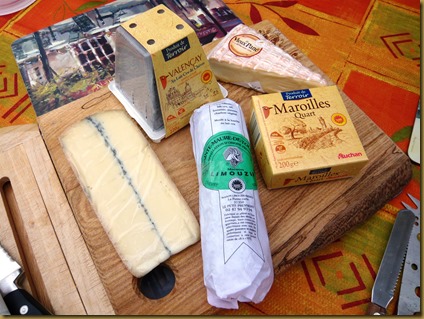 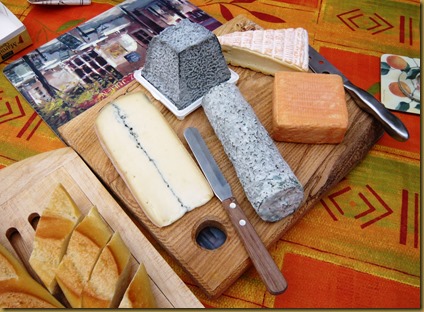 All of these cheeses are firm favourites of ours and in fact this lot were bought in the local supermarket.  The selection in any supermarket is huge and buying cheese becomes even more of an adventure if you go to the local markets.

On the left there is Morbier, a cow’s milk cheese with a layer of ash in the middle from the Franch-Comté region of France.  I like it because it’s creamy with not too strong a flavour.

The pyramid shaped cheese is from Valençay in the Loire Valley and is a goat’s cheese with a slightly sharp flavour with a mould and ash coating.

Next along is Vieux Pané, a cow’s milk cheese which has a tendency to become runny and rather pungent (in an old sock sense) when it has been open for a while. 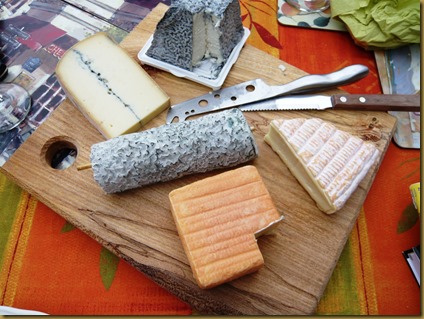 At the bottom in this picture is Maroilles, a cow’s milk cheese from northern France with a higher pong factor than all the others.  I love it, Nick is not so keen and it’s the cheese that will make your fridge or car smell distinctly cheesy in a very short time.

Last but not least, in the middle we have Sainte-Maure goat’s cheese made just up the road in Le Petit-Pressigny.  This is Nick’s absolute favourite and is the cheese that is served everywhere, every day in this area.  Well, almost.  It’s the one that you have grilled on pieces of toasted baguette in the classic “salade du chèvre chaud”, the ever popular starter or lunch dish that we all love.  And which in fact we will be eating ourselves as a light supper in only a few minutes, which is as long as it takes to make.

This particular one is fairly hard with an ash coating and grills nicely.  There are other, softer versions and indeed you can ask for it young and soft or fairly mature if you go to the cheese stall on the market.

Usually we buy this kind of selection of cheese to start off our holiday and will add others as the days go on, usually trying something we have never tried before.  After all, life is an adventure or nothing – so many cheeses, so little time !!