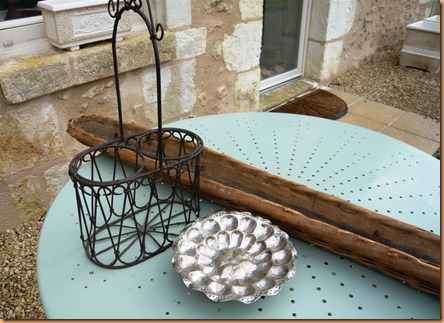 We bought the three items on the table at a brocante a couple of weeks ago.  The metal wine carrier will be used to carry a bottle of wine and a bottle of water to our picnic shelter when we start using it again……much better than having them wobble about on a tray as we step up and down over the decking and the uneven grass. 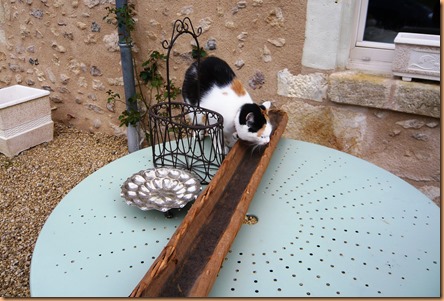 The long bread basket thing is, we think, a proving basket used to leave the dough to rise during bread making.  I have no idea why it should be so long but it’s not so much useful as decorative.  It now resides on display in our lovely bread oven. 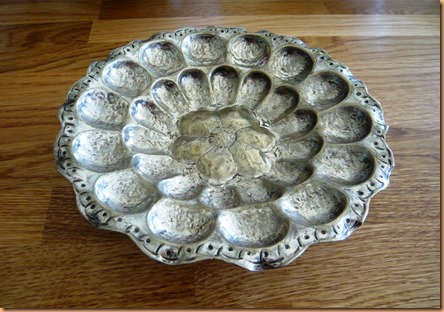 The interesting piece is this metal bowl.  I looked at it on the stall and the lady said it was for serving dried fruits.  I can believe that, as it has sections just the right size for things like dried figs, prunes and other fruits. 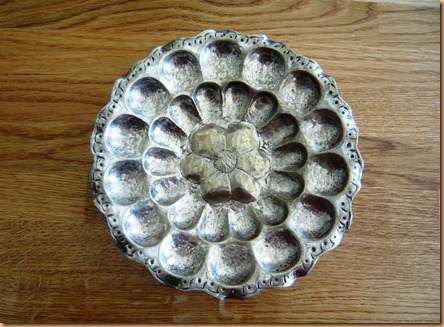 The curious thing is that I have never, ever seen one before and it doesn’t really look very French to me.  It’s quite heavy.  It looks like it should be made of tin or a similar cheap metal, but it’s too heavy for that.  I’m not sure that it’s silver or a mixture of silver and something else.  There are no markings on it suggesting silver although it does look like it would benefit from periodic cleaning with Brasso or Silvo.  It does feel heavy enough to be made of brass but it’s the wrong colour. 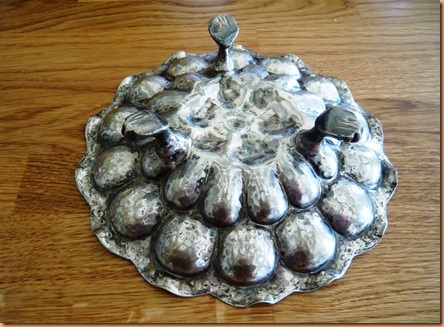 It has three nice legs which are firmly welded to the base, making it very sturdy and level. 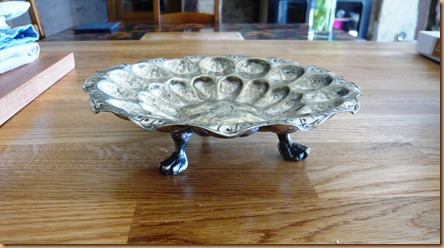 It’s about 20cm dia. and the markings remind me of a wall plate I used to have that came from Morocco.  I bought it for the princely sum of 3€ and it looked great with little Easter eggs in it on the table.  A bargain but also a mystery.