A SWOOP AND LOOP INCIDENT AT THE SUPERMARKET 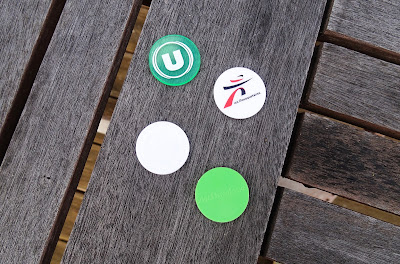 A couple of weeks ago Nick and I went food shopping and ended up in Le Clerc in Loches.  We like this supermarket and seem to think it has been refurbished in recent years, transforming it from a dimly lit dump of a place to a smart and airy place that's nice to be.


However, on this occasion we were the victims of a theft.

Having completed our shopping and on returning our trolley to the shelter (I don't know what you call those little huts where trolleys are stashed) I found that there was no longer our euro in the slot in the handle.  I went back to the car to ask Nick if he had selected a trolley that was a free spirit and didn't need a euro and he said "no!".

On closer inspection it seems that some little bar steward (I suspect a grubby looking kid that was following us around the aisles for a time) swooped and looped.  In other words, waited until our backs were turned and looped the chain back into the slot to eject our euro.  Leaving a trolley with the chain/catch thing inserted into the slot and our euro in his pocket.

Further investigation reveals that most supermarkets have trolleys where the chains are not long enough to do this.  At Le Clerc however, they are.  Their trolleys are giant fancy plastic affairs as opposed to metal ones and maybe the design requires a longer chain to link all the trolleys together in the shelter (or whatever it is called).

Friends then alerted me to the existence of the jéton - a plastic token that you obtain from the shop itself to use instead of a euro to release a trolley from the stash.  Now, instead of having a couple of euros permanently in the car door pocket, we have a small collection of jétons instead.

I suspect that the swoop and loop technique used by the little kid in Le Clerc was well practised and no doubt earned him some regular pocket money.  I will not be robbed again and will continue acquiring tokens until I have at least one for every handbag, purse and car door pocket !!

more of the same Shopping