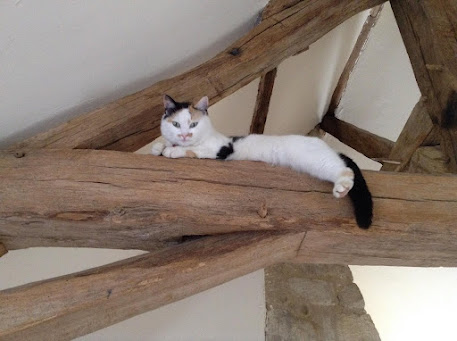 When we arrived chez nous after ten months' absence unwanted visitors had moved in. Mice had eaten the covers on our sofa and there were mouse droppings in the cupboard under the sink and the water tank cupboard. Our cat Daisy is, thankfully, a good mouser.

One morning soon after our arrival she was to be found camped out in the living room, motionless and staring at the corner behind the sideboard, a sure sign that that's where she last saw a mouse. Nick gathered his mouse catching kit which consists of an old towel and a long pair of plastic tweezers (actually a pair of food tongs that came with a cheap set of kitchen tools and prove invaluable for grabbing a mouse. I can reassure you that this is now their only purpose!).  The sideboard had to be moved which meant it had to be emptied first, a huge task in itself.  (Goodness only knows why we kept some of the stuff that was in it so it was an opportunity for a good clear out.)  While Nick and Daisy, on their knees and poised for action, were bearing down on the offending mouse a second one fell down from the beam above and narrowly missed landing on his head. The fact that none of us screamed shows how blasée we have become in dealing with our unwanted guests.

Daisy's efficiency at catching mice does have its disadvantages though. Every other night she will bring one into the house and upstairs to the bedroom as a trophy or present.  The other night she exceeded her hunting target by bringing us two presents. The first she let go and chased around the room for a bit while we nonchalantly pretended to be asleep. Thankfully she caught it again but we then had the pleasure of listening to her eat it, head first and with a sound not unlike someone chomping their way through a bag of crisps.  The fact that I can even write about this without a shudder tells how used we have become to the presence of mice in our house.

She then went out and fetched us another one. We were woken by the sound of her chasing it round the room for a while but drifted off to sleep again when all went quiet. We assumed that this mouse had met the same fate as the first and were surprised to see Daisy in a typical position of vigil at seven o'clock the next morning, staring at the blanket box.  The hunting kit of towel and tweezers was fetched again (we now keep it handy in the bedroom) and the hunt was on. This little blighter led us a merry dance and took some catching.  Nick sustained a hunting injury - a graze to the knee as he hurled himself to the ground and lunged with his tweezers. He missed.

Twenty minutes later, the bedroom looking like a war zone with furniture all over the place, the mouse was caught and ejected from the house. Daisy had by then lost interest and wandered off to enjoy more reliable fodder from her bowl of kibble. A different chomping noise, thankfully, and one that has never caused me to cringe!