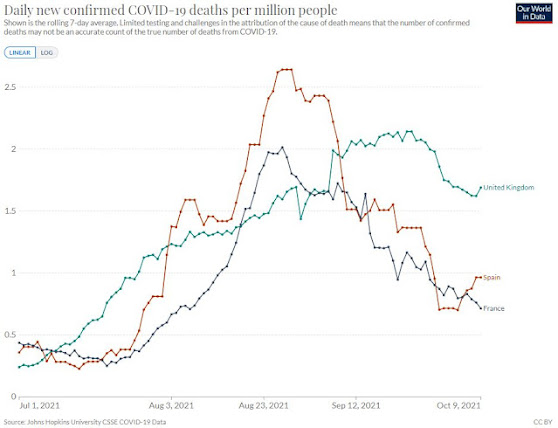 I popped into a charity shop this morning to donate some things and the young woman serving thanked me for wearing my mask.  She was wearing one herself as it was company policy for all staff to wear one.  Customers were advised to wear one but not obliged to do so and staff were not allowed to insist on it as since mid July government guidance is that it's up to the discretion of each individual.  My observation is that it's mainly the older people still wearing masks and most people are going without. 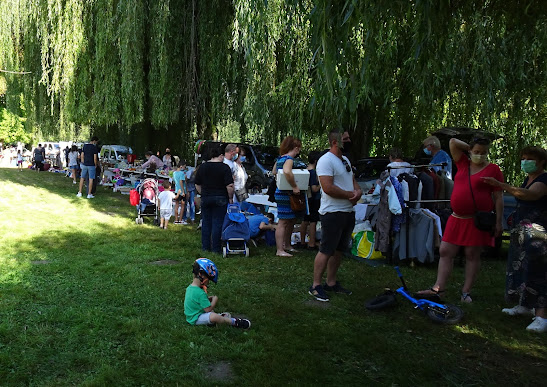 Everyone was wearing a mask at this vide grenier at Azay-sur-Cher on 5th September.
In France, at the time when we left four weeks ago to come back to the UK, the wearing of masks was still mandatory in shops and other public places including markets.  In Loches on market day there were gendarmes on patrol checking that everyone was wearing a mask and wearing it correctly, pointing out to people that it has to cover the nose as well as the mouth.  In restaurants we had to show our "pass sanitaire", a digital record of having both vaccinations, before being allowed to enter or even eat outside.  We felt very safe.
Back in the UK we feel nervous.  The graph above shows that the situation worsened here very soon after the easing of restrictions.
I heard a politician talking today on the radio, saying that numbers of infections appear lower in other countries because they aren't testing as many people.  That may or may not be true but the numbers of deaths are presumably more reliable and we are still at the top of the league table in Europe.  I get the feeling that in the UK the idea that we have to "live with the virus" has turned into a perception that a number of deaths is acceptable and, worse still, because it's mainly the old and vulnerable (and the unvaccinated) that are succumbing to the disease, that's fine.  As if these people don't really count.  Two plane crashes a week is what they amount to, at the moment.
I heard an expert in human behaviour relative to health issues putting a very good case for why wearing a mask, social distancing and hand washing are still the way out of this mess because vaccinated people still get the virus and still spread it.  It's just that if they're lucky they don't get very ill or die.  They just pass it on to those that will.  The success of the vaccine programme is effectively wasted if the disease is still spreading and gives people a false sense of security (the I'm alright Jack effect).
Are we taking bets on for how much longer the buffoon in number 10 will carry on pretending things are going well, that we are getting back to normal - and when he will suddenly decide to "follow the science", listen to the experts and restore sensible safety measures to being mandatory instead of advisory?

more of the same Differences, Politics, The virus.