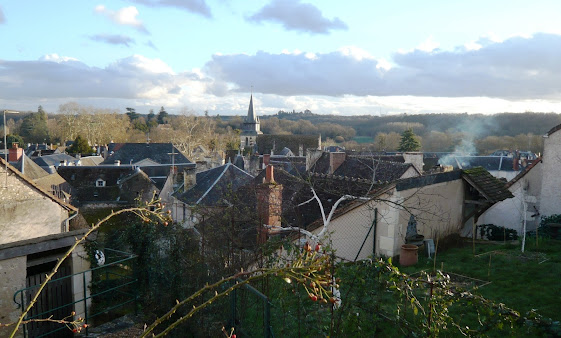 The rooftops of Le Grand-Pressigny in winter.
Well it seems that the refusal to accept my father's application in a Freepost envelope is a one off - an "isolated incident" unique to our local post office, according to the reply received by my MP from The Post Office, who looked into it very swiftly.
I wonder.  My experience in the workplace is that employees rarely make a mistake only once, that they are not usually found out until it's happened several times and that for every example you find there will be several more that remain undiscovered.
However, we are reassured that because the assistant did actually put it in the collection bag it probably will have been delivered.  No doubt we will find out in due course.  I expect there is also some relief in the MP's office that at least this particular system isn't broken.
Of course, the same principle applies to Christmas parties...for every one that is discovered there are almost certainly several that have not been found out about yet and that nobody will admit to !!
Bon weekend !!

more of the same Family, Life in the UK, Politics