ONE SPACE OR TWO? 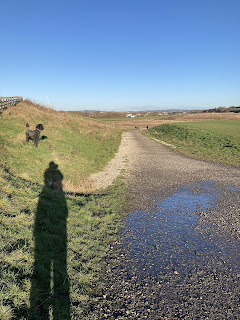 We have completed our online visa application and have an interview in Manchester on 14th February.  We have asked for a start date of 7th March but have no real idea of when we will actually be going to France.

One of the reasons for not going sooner is a forthcoming wedding for which I have been asked to do some baking and to make the bride’s necklace.  Both a total joy to do.  The dining room has turned into a jewellery factory and the living room is disappearing under mountains of recipe books. 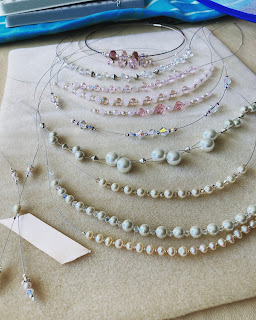 I’ve done a dozen necklace designs for the bride to choose from and Daisy has taken a keen interest in the beading!  I have discovered that those lacey food covers are excellent for keeping her from gently pushing the whole lot off the table!

My brother has offered to come and stay at our house for five days of the week every time we're away in France.  He's been working from home for nearly two years, just having to do occasional site visits, so "home" can be anywhere he has access to the internet.  Knowing that he will be only five minutes from Dad's flat especially over the weekend, and more especially on Saturdays when the restaurant is closed, is a huge relief.

Dad now has carers to help him with showering and from this coming week others will be going to give him his tea three times a week.  He gets lunch in the restaurant but had stopped eating anything in the evenings and was losing weight.  Fresh sandwiches were always there in his fridge but he simply didn’t eat them, saying he wasn’t hungry.  We decided to take it in turns to go at teatime every day and found that if we put them on a plate in his hand he would wolf them down.  Having carers to do this for three days will free us from having to plan our whole life around being home every day at 5pm or thereabouts.

This post has been written on my iPad, a first for me I think, the laptop being currently hidden under piles of beading and recipe books.  The annoying thing is that although I can read other blogs using the iPad, my comments don’t appear.  They just get lost.  This happened once before and I thought I’d fixed it but can’t remember how!  I can’t work out how to resize the photos either!

Just out of interest, do you go for one space or two?  I was amused by something posted on Facebook recently saying that nobody needs to put a double space between sentences nowadays, that it’s an unnecessary and outdated practice.  Decades of typing has hardwired the double space into my writing so I would have to think hard to stop!

Mind you, I’m also a bit picky about spelling and the erroneous use of the apostrophe.  Which probably makes me a dinosaur but I don’t care!  Now I’m officially in the dinosaur age group I'm luxuriating in not having to care about a lot of extra things!  (Double space there.)  How about you?