DUCKS IN A ROW, TWO NAILS AND A SCREW, THE COMPANY CAR AND A MARKET 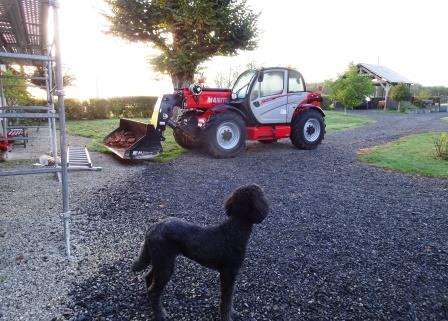 The new windows are nearly all in place, 4/5 of them.  On removing the old one in the en suite bathroom upstairs the builders said it had been held in place with only two nails and a screw (or was it the other way round?).  Any road, Duck (as they would say in my part of Derbyshire) they said it's a miracle the thing stayed in for so long and didn't leak.  The one above the stairs had about four screws apparently, so a better job.

I am happy to report that the new ones are now fixed in place with a more adequate quantity of both nails and screws and, as the builder said, when Putin's bomb goes off the house might fall down but the new windows will still be attached. 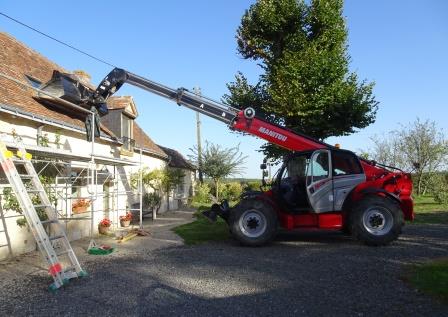 We need to have the windows in place well before the fitting of the new carpet to allow a big clean up of the upstairs and painting of the walls.  Nick has already varnished most of the beams.  The carpet is being delivered tomorrow, which in itself is a miracle as when I first phoned to arrange the date there was no sign of it, it had vanished.  However, it miraculously appeared overnight and with a bit of luck the builder's big tool, which we have affectionately called the company car, will be available to lift the three huge and no doubt very heavy rolls (or is it four, I can't remember) up into the bedroom via the window at the far end of the house.  Much easier than struggling to get them up a narrow, winding staircase.  I'm sure the delivery guy will be grateful for that.  The carpet fitting is booked for the 18th and in French this is called la pose.  The carpet fitter is called le poseur.

So, with all my ducks in a row it looks like we could be on schedule to get the bedroom decorated and carpeted, the house cleaned and put to bed for the winter, mouse proof measures in place, before we have to leave on 31st October.  That's the day that Nick runs out of days, the fiasco at Eurotunnel in August having cost him one that he could have done with keeping.  (Due to the problems we have had this year I have spent more days back in the UK than him so could stay on for another week, but it's not really practical to do so.)

The builders are a great team, thoughtful and considerate than most by far, but I still feel like the house is not my own when they're in residence.  I've reached the "I'm never having anything done to the house ever again" stage of weariness.  We've also been lucky with the weather, it being fine and not too windy at the right time for the window work.  Rain is a no-no for putting in new velux windows, apparently.  I shall be mighty glad, however, when it's all done, nice as these people are, so that we can get our house back and get on with the cleaning, decorating and generally putting the house back together in a normal state.  It will be great for once to be able to leave it clean and properly closed up for the winter so that next year we don't arrive to a huge amount of mess and work before we even start.

Talking of mess, I will have a little rant about NatWest Bank.  Their bereavement website that we were obliged to use to notify them of my father's death, close his accounts and transfer the money to the executor of his will (me) is absolute rubbish.  For nearly three months they didn't inform me that one of the documents I had uploaded was not acceptable and needed to be redone - in fact their last message to me said they had everything they need to process the transfer.

Only when I inquired using their online chat service as to where the money was did it come to light.  Then they wanted me to give feedback "so they could improve their service for customers in future".  Never mind the other sodding customers, where's the grovelling apology, the bunch of flowers, the bottle of champagne or M&S vouchers to compensate THIS customer for a huge amount of worry, extra work and aggravation?  Bereavement is hard enough to deal with without having to use a website that simply doesn't work.  I definitely have better things to do with my time than struggle with all this ****.

Oh for the days when all you had to do was gather all the paperwork and take it into the local branch, where someone who knew what they were doing would look at it all, offer their condolences and a box of tissues and process it properly. 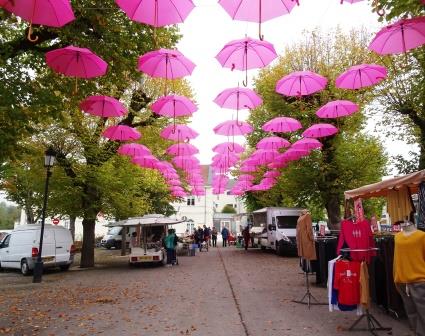 Whilst waiting for the second phase of the window work to start we took a day off to go to the market at La Roche-Posay and have lunch there.  It being breast cancer awareness month the market place was decorated accordingly and very jolly it all looked too. 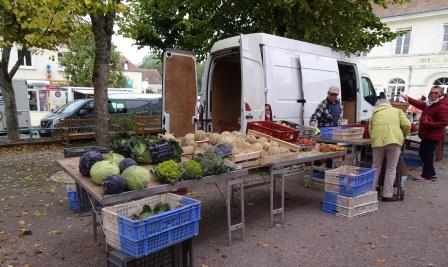 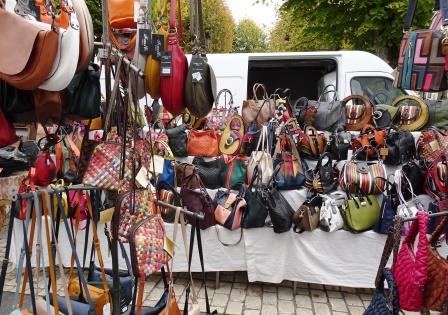 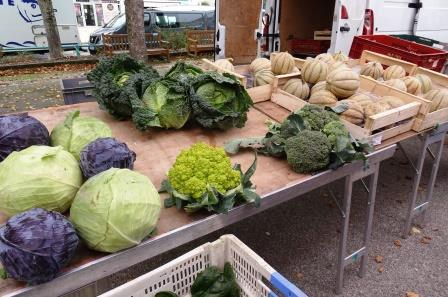 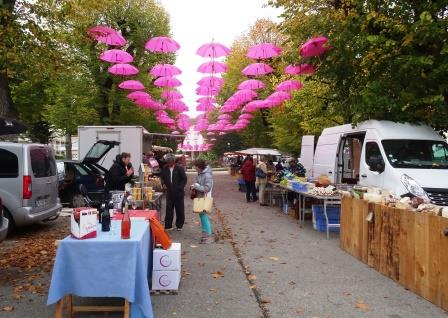 We like LRP (as we call it) as a town and the market is a delight.  There were fewer stalls than in the summer, the tourist and seasonal trade having gone until next year; the seller of brightly coloured linen clothes had swapped them for woolly jumpers, but there was still everything you could need. 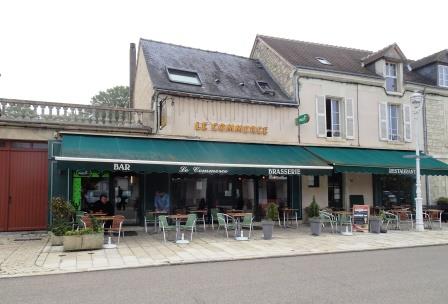 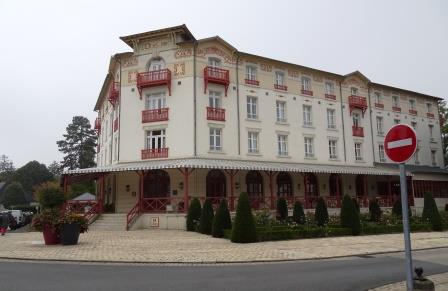 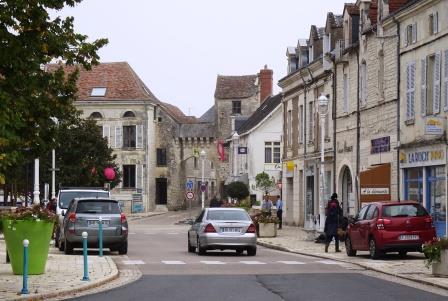 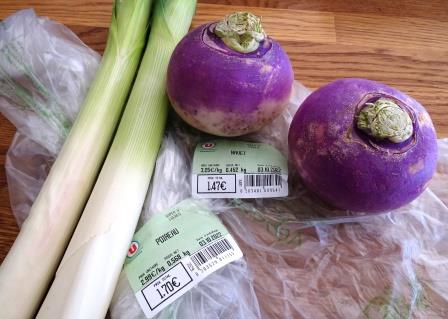 Interestingly, the cost of veg on the market stalls was pretty much the same as in the local supermarkets, although they looked much fresher.  Food has become an expensive item in France in recent years and one of the few things I miss about life in the UK is that you can still get a bag of leeks, carrots, turnips or parsnips, a cauliflower or a head of broccoli for less than £1 each or thereabouts in Tesco or Sainsburys.  (Unless they have also gone up since I was last there.)  In SuperU these leeks were 85c each in and the turnips 74c each. 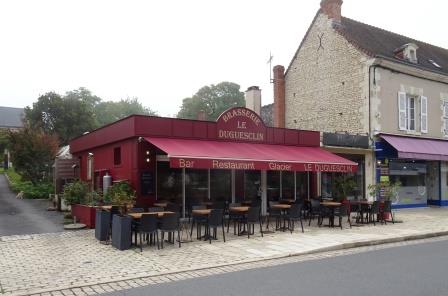 There are a number of bars and restaurants in town and they all look fairly ordinary and unprepossessing but we have eaten several times at "Le Dug" and always had a good meal there.  Which goes to show that you should never judge a book by its cover or a restaurant by its décor.  Tasty, well cooked food does not necessarily come only on designer plates. 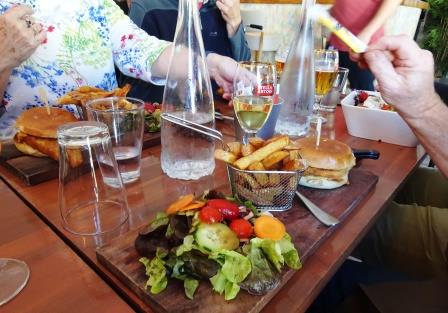 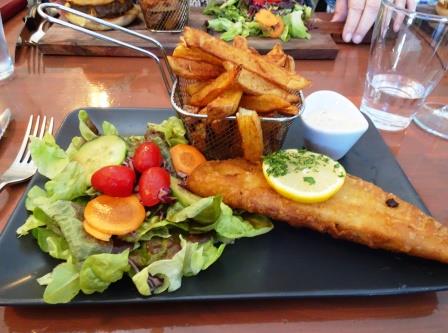 Last but not least, my brother is definitely on the mend.  Most of the tubes and wires attached to his anatomy have been removed, there is no sign of the kidney machine, he breathes and eats by himself without assistance and he's regained his sense of humour; hospital food offering many opportunities for a good laugh.  However, he can still only walk a few steps so is a long way off being able to be independent at home.  Still, it's good to know the worst is well behind him.