On the day we were to take ownership of our little house and get the keys we had arranged to meet Antony the agent there about an hour before we were due at the solicitor's.   Antony arrived, just a few minutes late and let us in to the house. All three of us gasped as we walked in. 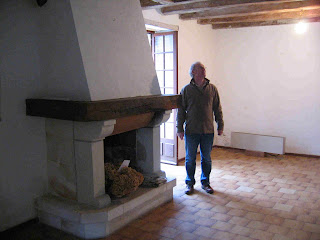 It was completely empty. Everything had gone. All the furniture, all the ornaments, the oven, washing machine and dishwasher, the light fittings, even the shower curtain and rail. 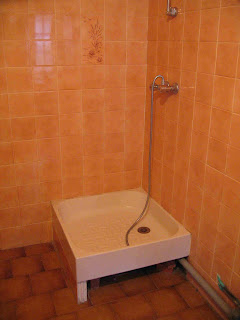 The only things left behind were anything that was either useless or difficult to unscrew and remove, including a fridge. (It was firmly fitted into a kitchen unit which was part of the "kitchen furniture" included in the sale.) There were bare light bulbs dangling from ceilings and walls. Wall lights were precarioulsy loose where someone had attempted to remove them. In the bedroom there was an old rickety clothes rail which they obviously either forgot or thought was broken. The grotty bedroom carpets were still there and they had thoughtfully left the loo seat. 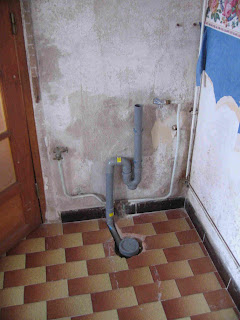 The space where the washing machine used to be.

Apparently where a toilet used to be, too.

We heaved a sigh of relief. In some ways it would have been useful to have a dishwasher and it would be expensive to replace it but on the whole, we were delighted that what we were left with was a blank canvas. 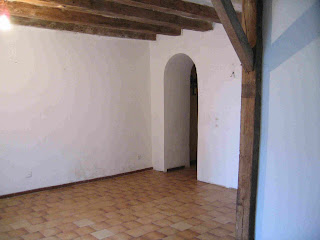 There was a certain amount of junk left in the cellar and on the landing but anything useful, such as the spare box of kitchen tiles that we had noticed before, had gone. All the intact roof tiles had gone from the pile in the garden; just the broken ones were left. 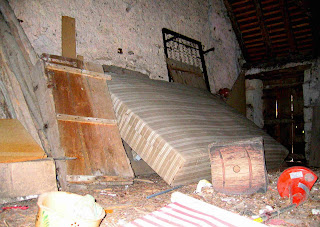 It looked as though our first job was to do some essential shopping. A bed, a table, some chairs.