We have developed a mode of travelling that works very well although it can be a bit gruelling. We leave home in Derbyshire mid-evening to drive to Folkestone, where we board a train at midnight, or a bit before if we arrive in good time. This makes for a less unpleasant journey south. Trying to get down the M1 for an earlier train (or ferry) is stressful and extremely hard work due to the horrendous traffic, which gets progressively worse the further south you get. Leaving home that bit later means we miss the worst of the traffic. It's roughly 12 hours door-to-door in total. 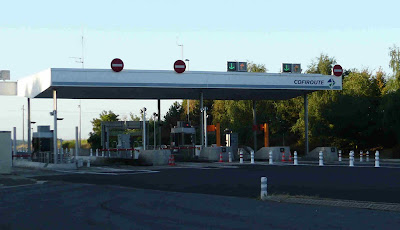 The péage at Tours at 7.00 am, the first day of our holiday.

We get to France in the early hours and press on. It's around six hours' driving to Le Grand-Pressigny so we take turns to drive or snooze, sometimes actually stopping in a rest area to sleep for a while if we are both too tired. The roads are usually pretty deserted in the early morning.

In August we arrived at our little cottage at about 8.15 am. Nick and Lulu went straight to bed. I was too thrilled to have come "home" again to sleep, so walked down to the village to get some shopping, stopping at the butcher, baker and little supermarket. I felt rather out of place in my denim jeans, shirt and cardigan. I noticed that even at that hour everyone else was wearing shorts and t-shirts and I then noticed it was actually rather warm. Little did I know exactly how warm it was going to get.

As I came out of the boulangerie, Henri, the patron and chef at Grand Ma's called to me and told me about the special musical evening they were having. A special menu and 3-piece jazz group. We had actually planned on an early pizza from the van in the village square and an early night but I thought this sounded like fun and we could always have a lie-in tomorrow. 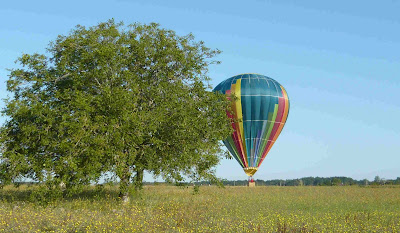 When I got back to the house Lulu was out in the garden running around excitedly. Wondering what was going on, I looked up and saw a hot air balloon drifting over the house towards the château. I wrestled my camera out of my bag and dashed up the hill just in time to see it land behind the château. 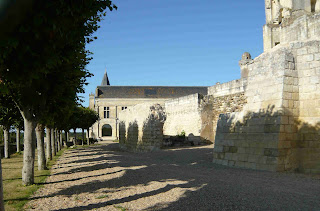 The château was looking gorgeous that first morning.
After a customary picnic-style lunch we wandered down to the village to the Association Rétro-Mécanique's annual event taking place down by the river. It was incredibly hot. People were shade-hopping from one canopy to another but Nick and I just wandered "mad dogs and Englishmen" fashion around the field, determined not to miss anything. 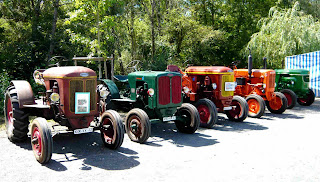 The usual display of ancient and very colourful tractors. 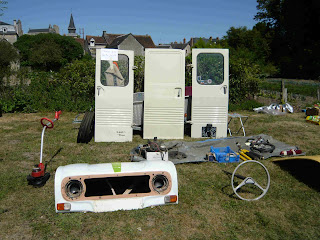 A rather unusual selection of spare parts were for sale. 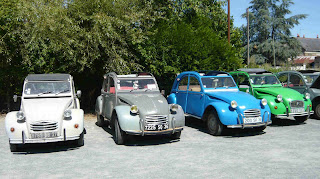 This bunch of old Citroens looked rather cute. 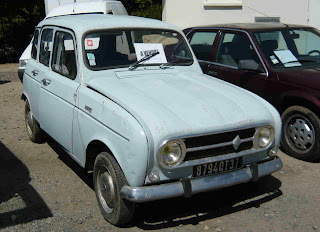 Move over, Célestine, what I really want is one of these.
(Any suggestions for a name on a postcard, please.)

I the evening we went to Grand Ma's and enjoyed a lovely dinner and excellent music from Callie, Nev and their French keyboard player whose name I didn't catch. I didn't quite catch the name of their band either but I would go and see them again. We tried really hard to stay awake long enough for the dancing but at 10.30pm gave up and went home to bed. 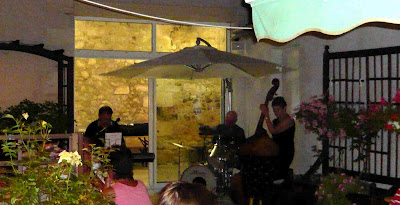 Callie is the one playing the double bass. She was great.
She didn't stand on it to play, though. Pity.
-------------
We had only been in Le Grand-Pressigny for a single day but we were having a great time. It was wonderful to be back and we had two whole weeks to enjoy. Heaven.