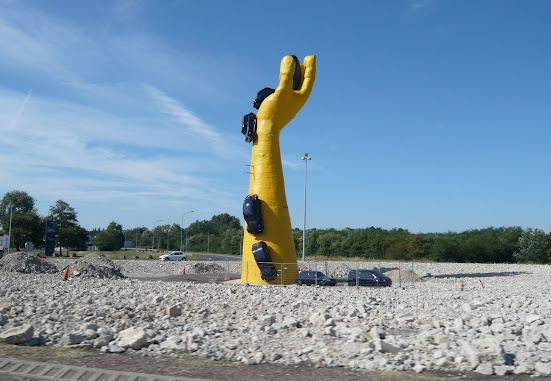 The former statue at Chatellerault, the tribute to car manufacturing in the city.

Destroyed during the gilets jaunes demonstrations in 2018.

It looks like our plans to travel to France in July are dashed already.  I booked the crossing just four days ago - two days before France has pulled up the drawbridge due the proliferation of the "Indian variant" in the UK.

Although deaths and hospitalisations are still very low in the UK, infections are on the rise in some areas.  Largely because our own government left the gates open for travellers from India to bring the virus with them long after India should have been put on the red list, then a failure in the test and trace system which didn't notify hundreds of people that they needed to self isolate.  Another example of the elitist incompetents that run our country failing to keep us safe and a disaster for the people of the affected towns.  They have admitted that probably two thirds of new infections are of this variant.

Another blow for us and everyone else who was hoping to travel to France (or Germany) this summer.

more of the same Politics