HALF WAY AND TWO BIRTHDAYS 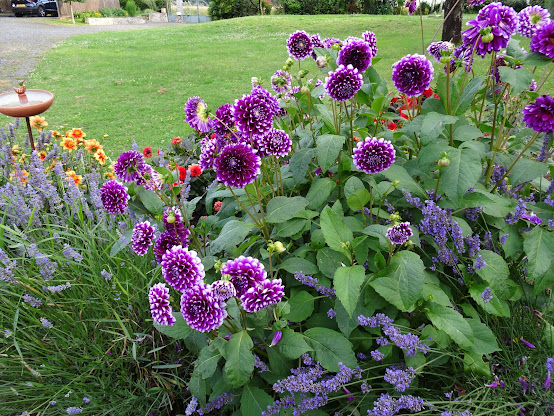 There was plenty of colour in the garden when we arrived in France on 30th June, a welcome surprise after such a long absence.
It's early November and, back in the UK, we are roughly half way through the twelve weeks that we have to be out of the Schengen area.
It's now almost dark by five o'clock in the afternoon, the trees in the wood behind our UK house are a riot of golden colours, we have had our flu jabs and our covid boosters.  Autumn is well set in and winter is lurking around the corner.  Nick has put the garden to bed, Hallowe'en and Bonfire Night are behind us and we have Christmas to look forward to.  Also two birthdays this week. 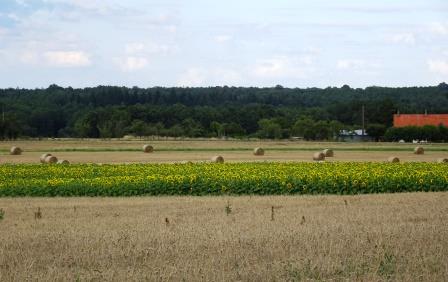 The house chez nous was surrounded by endless fields of sunflowers.
We both had a nasty reaction to our covid boosters.  For twenty four hours we were feeling washed out and shivery with aches and pains very similar to a dose of the flu.  It's the first time either of us has had any symptoms following our flu or covid vaccinations.  The jabs earlier in the year were Astra Zenica and the boosters were Pfizer. 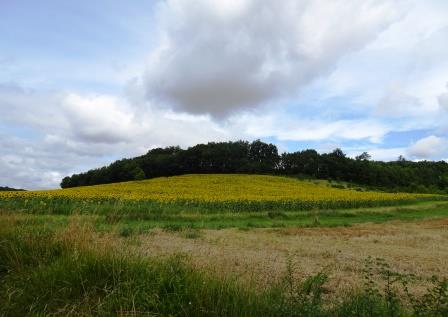 This summer was definitely the year of the sunflower.
We have been kept busy since we got back to the UK and those six weeks have flown by.  Reoganising some things for my dad has taken up a lot of time.  We are in the process of moving him to a different  GP practice. 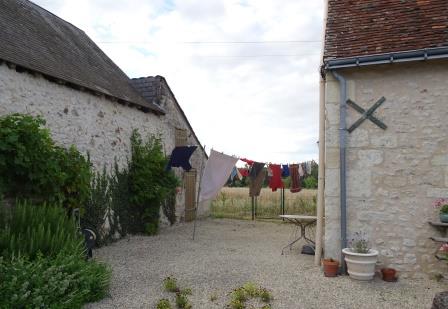 It's fairly windy chez nous, good for drying the washing.  We rarely have to use the tumble drier.

Two years ago when Dad had to give up driving because of his eyesight he moved to a practice much nearer to his home, the theory being that he could get there on his scooter if necessary.  He was very happy with the service there and we were so impressed that we also registered at the same place. 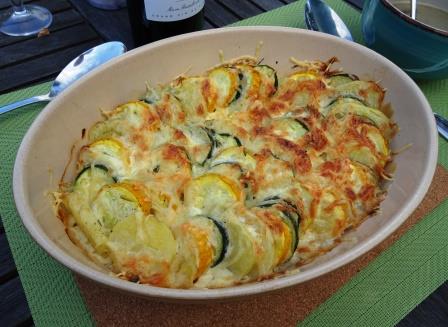 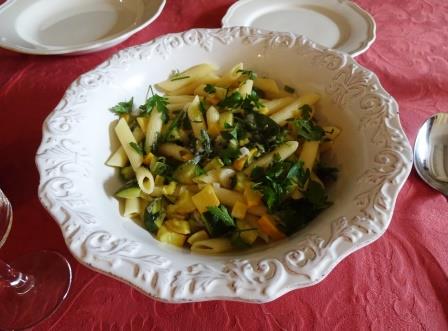 Arriving in France at the start of July was too late to grow any of our own veg.  As always we received gifts from friends who had surplus courgettes!  We made a courgette and potato gratin and Nigella's pasta with courgettes with some of them.
After he moved into his assisted living apartment last October I called at the practice to notify them of his change of address and was told that he could no longer go there because he was now out of their catchment area.  I therefore had to choose between the two surgeries nearer to his flat.  The one that I knew was best was not allowing patients into the practice during lockdown - they were having to queue outside in all weathers.  So I felt we had to use the other one.  How bad can it be, I thought. 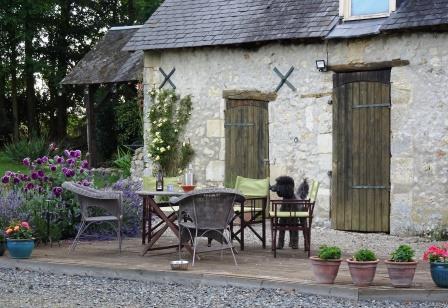 Although the weather was mixed we ate outdoors most of the time through the summer.
Well, the service has been terrible, they have messed up every single thing they have done for him, and the last straw was a couple of weeks ago when they changed their telephone system.  It took me two days of hanging on the redial button and about fifty phone calls to make him an appointment for a routine review.  I went to the surgery to try to make the appointment in person and there was a notice on the door saying that patients were not allowed inside to do this and they must phone in.  (I also took a letter asking if they realised how bad the new phone system was but the letter box was nailed shut.)  Goodness only knows what I would done if he had actually been ill and no wonder the emergency departments and ambulance services are inundated with people needing non-urgent treatment.  How can you blame people if they are ill and can't get a GP appointment? 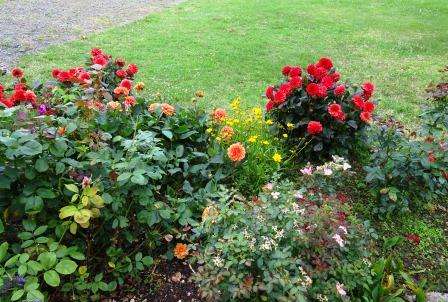 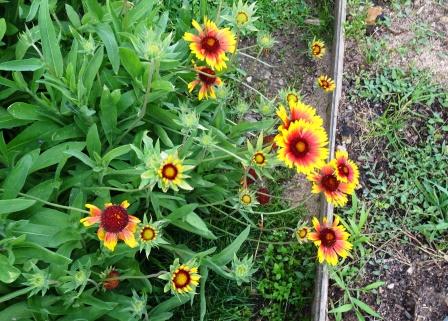 The garden was in a quite good state when we arrived.
So I'm moving him to the other one in town, where patients are now no longer made to queue outside - they are allowed inside the building into their warm and spacious waiting room - and the phone was answered after only two rings. 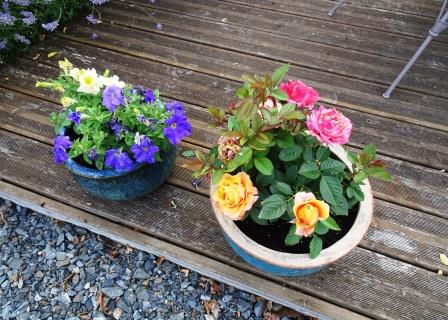 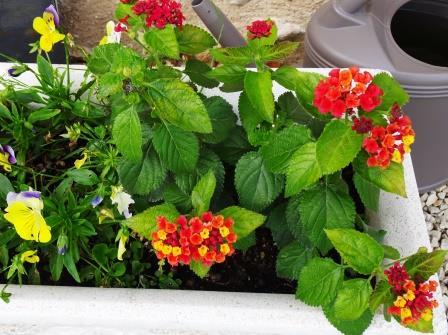 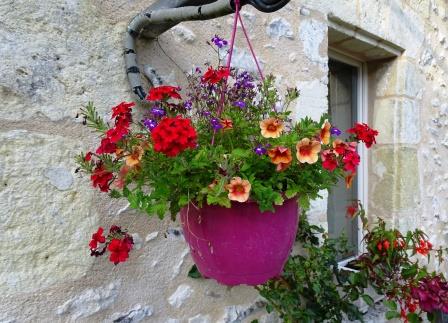 The little garden centre in Descartes still had some plants for sale and they were at knock-down prices. 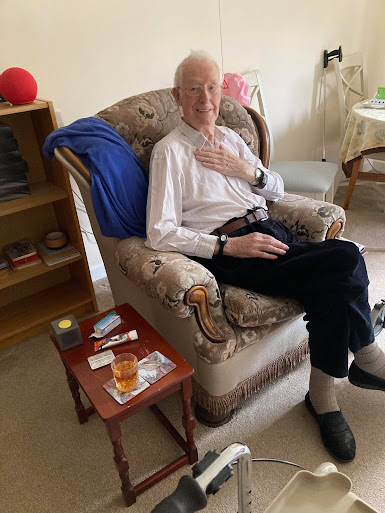 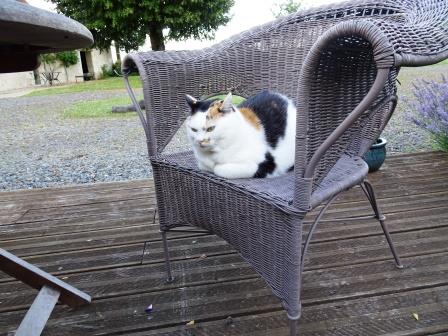 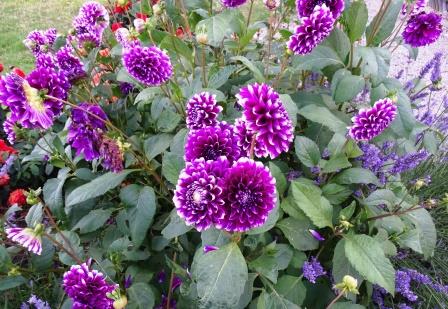 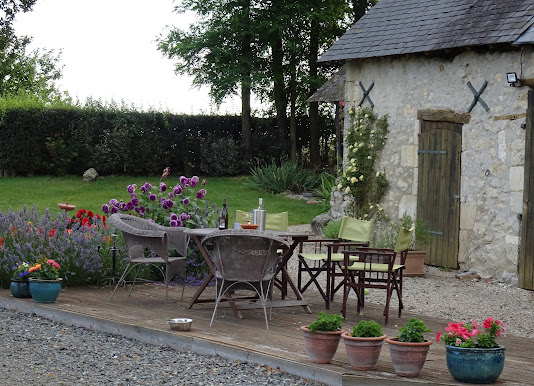 We plan to go back to France soon after Christmas or maybe New Year for a couple of weeks.  We will be able to finish putting the garden there to bed for the winter, clearing up the piles of leaves and getting them to the tip and generally making sure the house is as winter proof as it can be.  Only another six weeks or so to go and we can't wait !!
~~~~~~~~~~~~~~~~~~~~~~~~~~
Changing the subject.  Nick and I, and most of the people I know, would have been sacked if they had been using their workplace and work computers for their other job.  Especially if the other job was to defend someone against an investigation by our employers.  Someone I know was sacked because he sent jokes to a friend on his work computer, it was the company rules.  It seems that every week a member of our corrupt and incompetent government is caught out doing something that is totally unacceptable and would be a sacking offence for ordinary citizens.  How low can they go?

more of the same Family, Life in the UK, Photo gallery, Politics