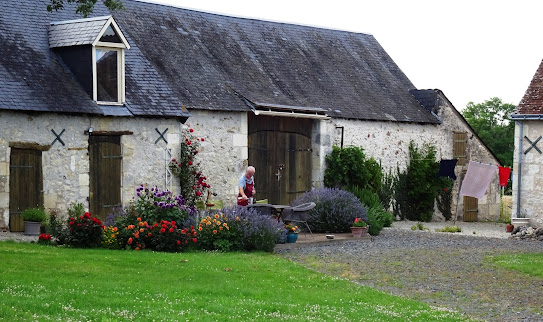 In early September Dad's lady friend came to stay with him for a week.  We were in France so my brother dealt with all their shopping needs but life was made easier because they could eat lunch together in the ground floor restaurant.  Getting Dad to eat enough has been a challenge so knowing he gets a cooked meal for lunch every day is reassuring.

The "Royal Visit" was a great success. Dad perked up and was a lot more alert, some of which we attribute to his eating more snacks but also to having someone to talk to him all day (he doesn't talk back much).

Dad no longer handles his own money and I now pay the restaurant proprietor, Sharon, by bank transfer online.  After the departure of the lady friend Sharon sent me a text with the bill to settle up.  She also told me that Dad now has a "pudding* and a cuppa*" every day which so far we haven't been paying for.  That's good news I thought, a pudding every day will help to stop the weight loss and extra fluid is a bonus.  I went into online banking, adjusted the four weekly payment to include the puddings and the drinks in future, and settled up for the puddings and drinks supplied so far, sending Sharon a text with my detailed calculations.

Three weeks later Sharon sent a text to say Dad no longer has a pudding.  It's as we thought, he ate one every day that week in September to please his lady friend!  I did the complicated sums and adjusted the next standing order online for his restaurant bill to include the "pudding overpayment".  I sent a text to Sharon explaining in detail how I had arrived at the amounts paid.

Shortly after that Dad told us he never has a cup of tea with his lunch.  I questioned him closely.  He's sure they never bring him one, he never gets offered one and he never asks for one.  He said he doesn't want one.  Dreading an awkward conversation with Sharon and the palaver of working out the sums again I checked with him several times.

My brother was due to visit him last Sunday and eat with him in the restaurant.  He was going to observe the routine and clarify the situation regarding the supply of drinks.  Unfortunately Dad forgot he was coming, went down early for his lunch and was back in his flat by the time my brother arrived!

So, I questioned Dad one more time.  I timed my phone call for when he would be back in his flat straight after his lunch.  Did he have a cup of tea?  Does he ever have a cup of tea?  Do they offer him a cup of tea?  The answer to all three questions was no.  At £1 a cup it doesn't sound much but it mounts up and I feel it needs to be right.  The implication that we were being charged for something that they were actually not supplying niggles me.  Harrumph.

I composed a difficult text to Sharon, deciding to write off the overpayment but make future payments correct.  Having done that I settled down in front of my laptop to do some Dad related paperwork.  Five minutes later the phone rang, Nick answered it and it was Dad.  "I've been thinking about the cups of tea."

My ears pricked up and I had a sense of dread.  "They do give me a cup of coffee every day instead."

Nick found me crumpled in front of the computer, head in hands.  What on earth was I going to say to Sharon without looking like a neurotic and a complete idiot.  Going to my phone to compose an excruciatingly embarrassing apology I noticed that luckily, I had forgotten to press "send".

*For anyone who is confused, a pudding is a dessert.  Other terms for it include "afters", "sweet" and simply "pud".  A "cuppa" is the word normally used for for a cup (or mug) of tea.  A cup of coffee would normally be referred to as "a coffee".