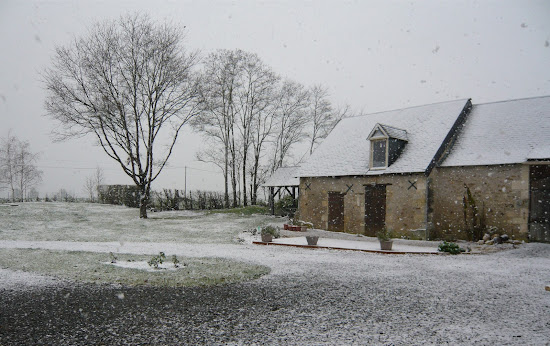 It snowed chez nous in January 2016

From today UK citizens will once again be allowed to travel to Germany, dependent of course on negative tests etc.  We have fingers crossed that the French will soon follow suit and lift the ban that only allows for "essential travel only".

The virus is all around us here in the UK.  Estimates vary from one in fifty to one in thirty people being infected but most of them experiencing no symptoms.  Those that do mostly have something similar to a cold or at worst mild flu.

We know of whole families that have been infected, only one having symptoms.  In our own family a nephew and his fiancée have caught it twice since they were double vaccinated, him after having his booster.  Again only mild symptoms.  Those worst infected are the unvaccinated.  Many of those being people who have declined the vaccine by choice rather than circumstances.

I overheard a conversation between three people the other day, in a shop doorway.  A couple in their fifties were talking to a much older woman who said she wouldn't have the vaccine because you have no idea what's in it.

I have wondered what I would say if I got into such a conversation.  Would I accuse the person of being selfish, of putting not just her own health at risk but also that of her friends and family, not to mention every person she breathed on?  Or would I feel obliged to respect her view?

I think I might be tempted to say "well I hope you get away with it if you do get infected".  Or maybe "you don't know what's in most of the food and drink you have been consuming all your life either, not to mention all the other tablets you have taken when you were ill, or the ones that undoubtedly keep you alive".

More than likely I would simply end the conversation and step back to a safe distance for her sake and mine.  My understanding is that it's hard to dissuade the misinformed these days.

Today in our part of the UK the sky is blue at last.  Weeks of grey cloud and endless drizzle have only been bearable because of the distraction of Christmas and New Year.  For once it hasn't rained overnight and the forecast is for a dryish spell and very cold temperatures.  Nick will be able to resume his woodland walks with Hugo - they both enjoy an hour's trample through the woods and fields every morning but not when they come back covered in mud.  The washing machine has been going every day to cope with muddy clothes and dog towels.  Lately their usual walks have been so awful that they have resorted to the paths and parks that are good under foot in wet weather with the disadvantage that every other dog walker in the area is doing the same thing.

And so we keep our heads down.  To catch the virus and have a mild dose of it would be bad enough but to have to self isolate when there is dog walking to do and Dad to look after would be very awkward.  If the French drop the drawbridge back down and we have the opportunity to go for a couple of weeks to finally sort the garden and house for the winter it would be tragic if a positive test result stopped us from going!

more of the same Hugo, Life in the UK, The virus., Weather