In July 2008 we spent a fortnight in our little cottage in Le Grand-Pressigny. As it turned out, those two weeks started well, continued superbly and ended in a magnificent finale. We had fabulous weather, too. This was everything we had hoped for when we bought our holiday home. On Thursday 9th July the Tour de France came through the village - stage 5, Cholet to Châteauroux. This only happens about every 10 years so we were thrilled to be able to see it and join in the fun. 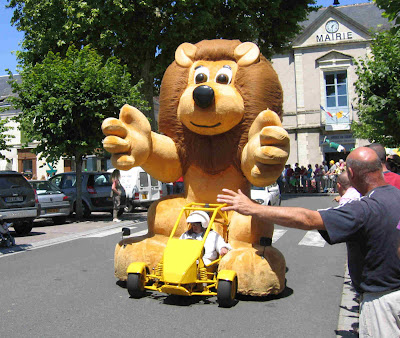 What a day !! We walked down to the village square about 11.30 am to find the whole place buzzing. Paper cutouts of little t-shirts in all the colours of the teams had been strung as bunting from trees and lamposts. All our friends were already in position outside the PreHisto, enjoying the sunshine. Tables and chairs had been bagged early and there was barely a space left on the pavement from where we could get a view of the race. We found a place on the other side of the road and took it in turns to nip across to buy a drink or mingle with our friends, afraid of losing our excellent position, even though the competitors were not expected for two hours yet !! 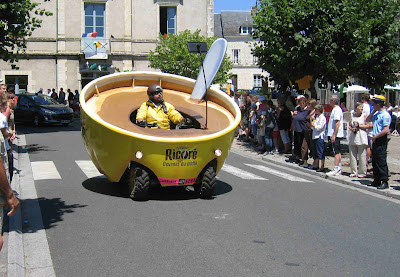 The first sign of action was the arrival of a couple of police motorcyclists. The crowd cheered. Then the caravan started to come through. I had never seen anything quite like this in my life. It was an amazing spectacle and absolutely brilliant fun. For almost two hours one float after another came along Grande Rue (the wrong way) and threw sweets and gifts to the children as they went by. 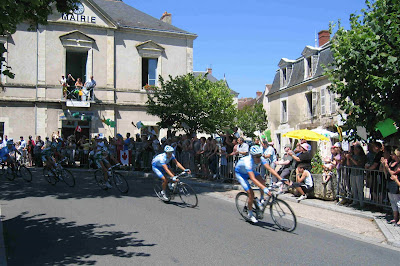 After a short lull the next pair of police bikes indicated that the peloton was coming. At that point the windows opened in the Mairie above the Tourist Office and the Maire and his staff leaned out and waved and cheered along with everyone else. A press photographer was busy at an open second-floor window below the PreHisto and a helicopter circled above. It was over in a flash !! It had taken two hours for the caravan to pass through and the peloton was gone in seconds. Or so it seemed anyway. 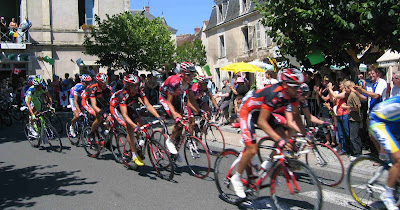 Of course, that was not it for the day. The TV coverage is slightly behind the actual race so people then piled into the PreHisto to watch the proceedings on the TV. There was much oohing and aahing at the sight of the château on the screen, and cheering at the cyclists. Then the street party lingered on, there was much debriefing to be done, with the aid of liquid refreshment and sandwiches from the PreHisto and the Jean Bart. As the afternoon wore on, people gradually drifted back home, the crowd that had turned up for the day disappeared and the village returned to normal. 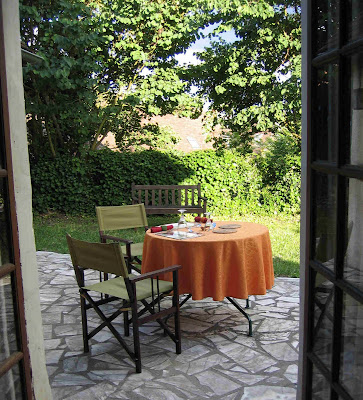 We wandered up the hill to our little maison and settled on our terrace overlooking the rooftops of the village. As we sat enjoying the evening sunshine, we commented that the peace and quiet was amazing considering we are right in the middle of the village. We talked about the events of the day and could hardly believe our luck that we had found this place.