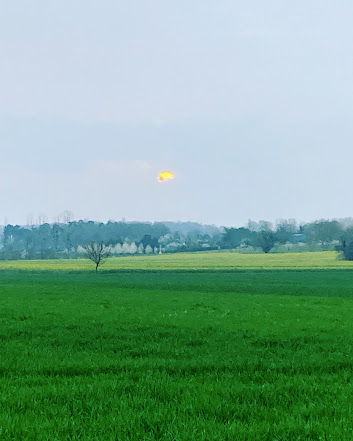 We went to Loches for a garage visit yesterday teatime, did a spot of shopping and called for a pizza at our favourite troglodyte restaurant.  I took this picture of the sun setting above the clouds over Ciran on the way home.

Our back garden in the UK this morning*.

Incredibly, earlier in the week snow was forecast for here tomorrow.  That forecast has been moderated to freezing temperatures overnight rising to 5°C during the day.

Last weekend we were basking in 23° and having our first bbq of the year!

*My brother is currently staying in our house in the UK for much of the week while ever we're away so that he can be nearer to my dad to keep an eye on him.  His house is 60 miles away, a motorway journey that can vary in time from one to three hours depending on volume of traffic and, more than anything, diversions for road works and crashes.  Such is route planning in the UK.

Our house is normally a five minute drive from Dad's flat.  When the road becomes blocked by traffic we have discovered ways around it, often a detour of several miles that can take much longer but better than just sitting in a queue.

Interestingly, my brother said the other day that he now understands why we grumble so much about the traffic in Derbyshire.  Apparently he used to think we were exaggerating, but now that he is living there for most of the week he gets it.  Living on the outskirts of a heavily populated area with a major motorway going through the middle of it is a recipe for travel misery.  Every time there is a crash traffic gets diverted right through the outer small towns and villages, through the middle of the main town and out through the smaller towns and villages on the other side, causing huge traffic jams and choked roads everywhere as people try to find other ways to get where they're going.  Much of this motorway is "smart motorway", where the hard shoulder has been sacrificed to create a fourth lane to ease the congestion.  They are death traps and we feel we are taking our life in our hands every time we use one.  Most of the fatal crashes involving breakdowns occur on these motorways and they're still being built.

What's also being built is thousands of new houses on huge housing estates all around the outskirts of the town.  Thousands of acres of farmland are being developed and as these houses gradually become occupied it's already noticeable that all the roads in the area are getting busier and busier and the system fails completely when there is a problem such as a road blocked by a breakdown.  It only takes the road to be blocked in one direction because of a broken down bus or lorry for traffic flow to come to a stop and cause chaos.  Frustration causes angry drivers to drive badly and more accidents follow.

The road outside our French house has been busy this morning.  At least four cars and a tractor have passed in the last half hour!  And we're expecting the bin lorry any minute now!