On Sunday we left home in the UK at 4.45am and arrived chez nous in France just after 6pm, a straightforward journey of just over twelve hours.  We even stopped for a burger and chips at Burger King in Yvetot on the way.

All seemed good when we arrived, the heating on and the house nice and warm.  Our house guardians had told us there was a problem with the basin tap in the ensuite so we were prepared for that.  What we weren't prepared for was this: 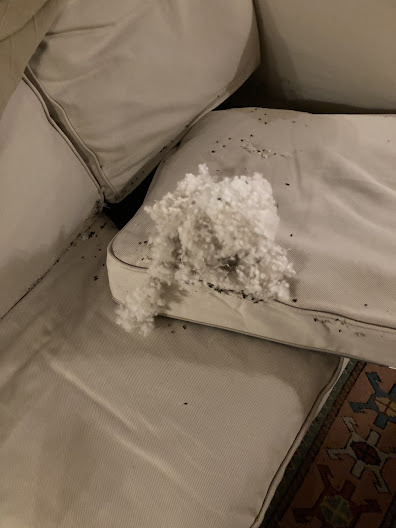 The living room had had an invasion of mice.  The little bar stewards had nibbled the covers on all three sofas and excavated a hole in a seat cushion to extract nesting material.  They had also eaten a path up both of a pair of curtains  and consumed a whole 5kg bag of Hugo's dog food.  We think that was probably the cause of the trouble, leaving plenty of food for them to eat.

After last year’s experience we had stored all the scatter cushions in big plastic crates so they were not damaged.  Unfortunately the mouse activity also included upstairs.  There were mouse droppings all over the house, two bedspreads had holes in them and they had attacked the duvet on the spare bed.

This was not the welcome we had been hoping for!

However, after the winter we had had we were not to be ground down by the activity of a few pesky mice!  More like an army of mice as it turns out, but we set to and hoovered up as much debris as we could, remade the bed with fresh linen just in case and retired for the night. 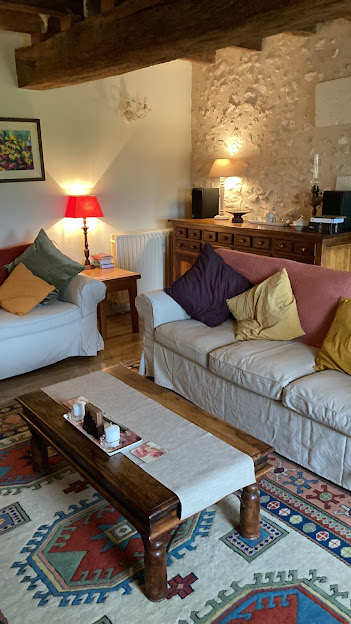 On Monday the weather was glorious so we sorted through the damage, washed everything we could and got it on the line to dry in the sunshine and light breeze.  We dusted, cleaned and hoovered everywhere until there was no trace of the invaders, Nick cut the grass while the weather was fine, and at half past four the elusive gardener turned up to discuss our gardening requirements.  We said that now we were here we could manage the grass and hedges ourselves so all we wanted him to do was trim the lime tree.  After he’d gone we dashed up to Loches to buy a new tap for the en-suite wash basin.

On Tuesday I went to Ikea in Tours to buy new covers for all three sofas while Nick fixed the tap and by Wednesday evening peace was restored in the house and all was calm!

Well, almost as there are a few places where evidence of the invasion still lurk but they will be dealt with by lunchtime today!